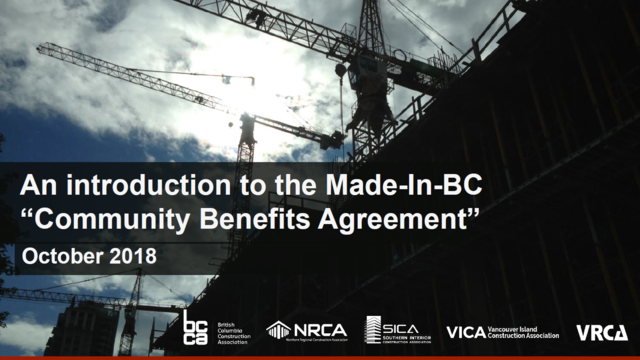 In Fall 2018 BCCA met with regional members to share opinions on the potential impacts of the BC CBA. A summary is available for viewing, including remarks from the discussions and in-room polling results. Although most contractors feel very strongly that the CBA is not going to be productive for BC, BCCA is preparing policy recommendations intended to achieve desirable outcomes for the stated goals of local, non-traditional hiring and timely, on-budget public sector projects.

Here are some key points to be aware of:

Premier Horgan claims this approach will support local hires, drive apprenticeship, training, and employment opportunities for women and indigenous people, that projects will run more safely, efficiently, and economically, and that there will only be a modest 4-7% increase in construction costs.

What we're doing about it:

“BCCA is a signatory to the Pattullo Bridge Petition because it’s imperative that industry act decisively and with unity in response to this action by government. Conscription of the construction workforce into designated unions as a condition of work on public projects is counter-productive to the health of our industry and our economy, and infringes on our rights and freedoms as Canadians. Construction employers across BC - regardless of labour affiliation - have let us know their grave concerns about this policy and we’re here to make sure it doesn’t move forward in its current form.”
- Chris Atchison, President

How you can get involved:

Join our grassroots letter writing campaign to tell Premier Horgan, your local MLAs, and the BC MP’s that represent our province in Ottawa that this CBA will not be accepted by our industry.

Save the date! BCCA’s members-only Town Hall Meetings this September...